Good morning. We hope all our furriends have a great Caturday. We're still on vacation here and next week will have lots to talk about but for today... 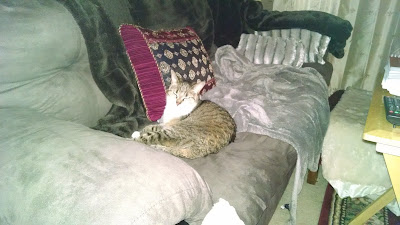 I'm being helpful as always. Mom and Auntie Mary have plans for today but they were STILL asleep this morning when they should have been up, so I helpfully rubbed noses with Mom so she'd wake up. She was very grateful and jumped up so she could go do that strange thing of standing under the water. Now I can relax in the glow of a job well done. Also, I've been on good terms with Auntie Mary most of the week. I checked her out thoroughly and declared her Threat Free. I've even graciously allowed her to give me head scritches.

Toby though... that boy has been UTB most of the week. Scaredy cat. 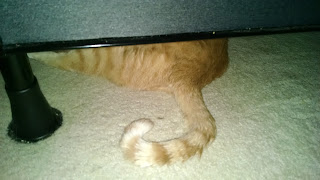 Leia, Leia... as usual, you have it wrong. I am NOT a scaredy cat!
I'm simply performing a very in-depth threat assessment here.
These things take time, y'know.

Can I help it if all Auntie Mary's references haven't come back yet???
And then they have to be verified, and a committee formed to render a decision,
and there is an appeals process.... 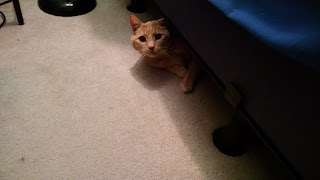 Our dear furriend, William, has left or will soon be leaving this world. He was one of our first blogging furriends, so he was very special to us, and will always be remembered.

William, you will have excellent company - UK's Fat Eric, and Eric, the great orange mancat from Eric & Flynn's blog, and most recently, Spooky. There are many others, of course, who wait to show you around the Bridge.

We take comfort in knowing you leave behind Caroline, and the teeny boys to carry on.

Until we meet again -

- Toby and Leia (and Cathy)

Finally Friday - And we don't need no stinkin' RULEZ!

Moms can sure be fussy sometimes. Ours is pretty laid back but she has one firm rule - NO biteys. Sometimes though, it's too tempting. Those lil fingers so close, and especially when she wants to stop with the head scritches BEFORE I'm ready. If I give in to temptation, she walks away. Meanie. 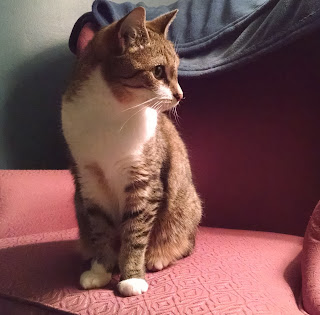 I don't even bite that hard, ya'll. Sighs. Wuss.

And now for OUR big surprise - Auntie Mary arrives tomorrow! We had no idea. Mom sat down with us last night and explained she will be with us for a week. And she asked us to be nice, too.

But.. but... Mom.... she's going to be sleeping on MY bed! I thought hoomins weren't allowed there?!

Happy Caturday to all our furriends.

PS: due to the whole vacation thing next week, we may not be commenting or posting much. 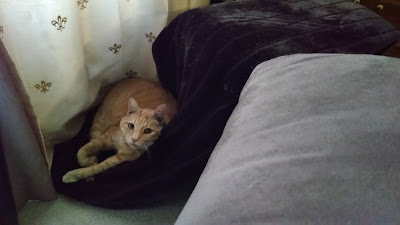 My heart lives within these two furry folks. - The mom

Our handsome furriend Spooky passed over today. Please visit his family, if you can. They are heartbroken.

As always, our mom is VERY happy that it's Finally Friday. We wish everyone a fantastic weekend.

For me, however, I could be better. Do you see how comfy I was here? 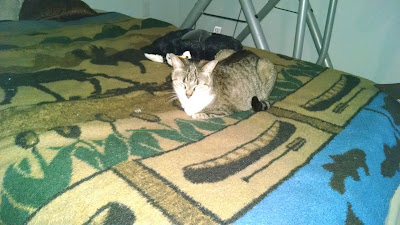 I truly was, I am very fond of this bed. I was all settled in when Mom comes in this morning, doing stuff that disrupted me, and I walked off. She tried to convince me to stay but I left anyway. The relaxed mood was broken, y'know. No good now. 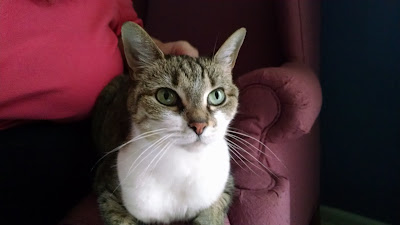 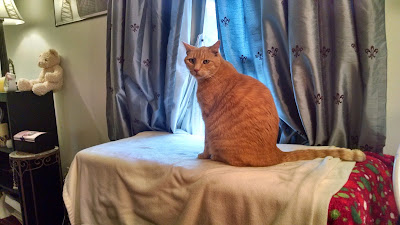 I am NOT sorry. Not the least itty bitty bit. I OWN what I did. And I will do it again as soon as I can.

It was PAWSOME! Mom has deprived me of good stuff to knock off  the dresser for months now. So last night, when I saw this bottle there, I knew I had to go for it. I sat next to it, looked at Mom, and inched that sucker right off the top. Three pushes and it was a goner. She couldn't move fast enough to save it. 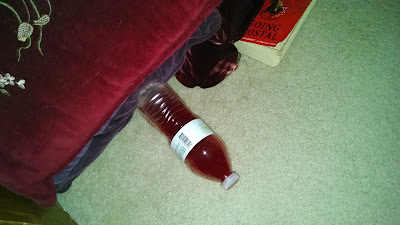 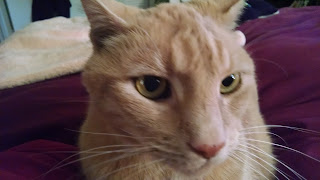 Yeah, yeah, I know everyone is all "ooooo" and "ahhhh" over Leia's Princess Warrior act.
But did anyone think about ME? How *I* felt?

There I was, napping peacefully and quietly when that girl went KA-POW on the glass and screamed her tiny head off. Woke me right up, and it was a good dream too. I was catching the Red Dot! Even in our dreams, how often does that happen, I ask you?

Well, it's ok. I will be a gentleman kitteh and let her have her moment of triumph. 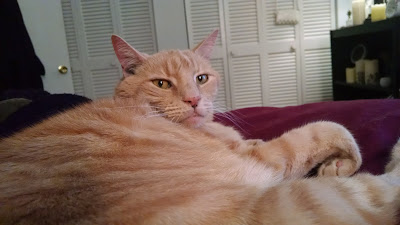 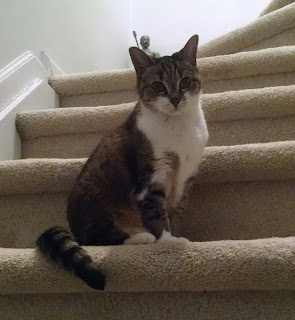 So this afternoon we are all hanging out in the living room. Mom is watching tv on the computer, Toby was napping on the rug, and I was pulling guard duty by the glass door.

Suddenly I SCREAMED! and Mom came running. She thought something awful was
happening to me - and it was. There was an Ebil Introoder outside!

So I SCREAMED at him "you better get off my deck, you bad kitteh!"
Ok, Mom also yelled at him, so that probably helped. We make a good team.

E I jumped the fence ran off. It took awhile for my big tail to calm down, but I was a very good girl. I did NOT attack Toby (like he's done to me) and I was very polite to Mom while she was soothing me.

I am a purrfect lady after all. One need not be a heathen when fighting off enemies. 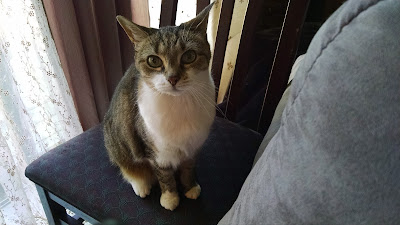 Today we're excited to unveil our new Fairy Garden. Although we felines didn't get our paws dirty, and we couldn't supervise directly, we WERE consulted about each step. Trust me, furriends, there was a LOT of discussion about :


"If I Were a Visiting Fairy, What Would *I* Want?"
** we neither believe nor disbelieve in the existence of small mystical creatures (or big ones)
HOWEVER it seems prudent to not offend them if they are in fact out there. 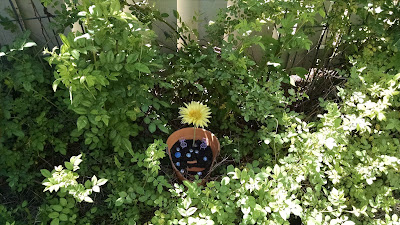 The Interwebz wasn't that much help, as there are many differing opinions on their possible needs and wants. We decided that fairies are most likely very wild creatures, most comfortable with as natural a setting as possible.

As we all know, hoomins tend to think about what they want instead of what kittehs, I mean fairies, might want. We considered such impawtant questions as houses (Mom said some houses she saw in the store didn't even have a way for them to get into it! Honestly, what are they supposed to do, sit on the roof? Typical hoomin thoughtlessness, if you ask us).

Also, we didn't have to debate long to decide they probably would like some shiny stuff, so we added some light blue reflective pebbles. And of course, tiny chairs to sit on. A toadstool for ambiance. The cheerful daisy, however, is fake, from a craft store. We told you Mom was awful at gardening. (it might not even BE a daisy, she just thought it was.) 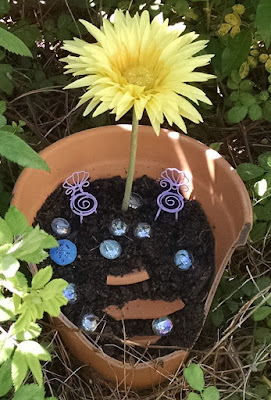 So here it is.

We actually do like it, and hope that any Wee Folk who might flutter by
will appreciate taking a break in this spring salon we made for them. 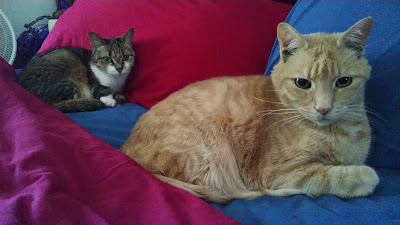 Meow to all our furriends! Mom wants to say a few words, so we are going back to sleep.

Mom:
So.... when it comes to cat health problems, I swear it's *never* easy.
And always, always, it's a question of "am I making the right choice?
Will this medicine/procedure help or hurt?"

I'm not really concerned about Leia. She sleeps harder these days, I think there is a small bit of hearing loss, and I can see a little stiffness at times, but none of these are at a level that concerns me.

Toby.... medically, it's always Toby. He may be big but he's also fragile. He has several problems. Last night I tried to address one of them, some form of arthritis. Given his particulars the only medicine the vet wanted to give him was Tramadol.
Let us just say his first dose was also his last. It didn't go well.

What my long years of dealing with cat health matters has taught me is that no matter what the vets say, or the advertising, or the glib websites, it's Never.Easy.

And sometimes, some days, there just aren't any good answers.

Finally, I got my proper Mancat Monday back. About time! 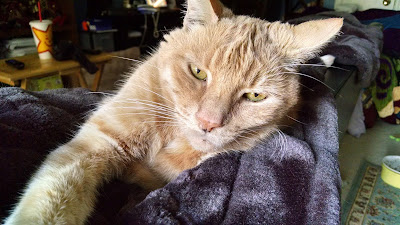 So, remember we told y'all about how Mom got that abominable machine
that cleaned up our yaks? Wellllllll do I have a story for you about that. 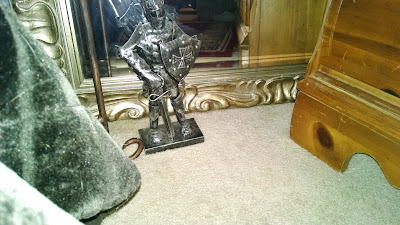 That stupid thing has removed a lot of our careful work, which just wasn't fair.
Not saying WHO, or if we got together and planned this, but some kitteh left a nice bit
right in front of the mirror, behind the metal guy. Right next to all that scrolly wood.

Very hard to clean up too. That mirror is very heavy and it's kind of a hidden spot - it really was an excellent choice, because it's not a place Mom looks at very often.

Such an artistic effort, it almost brought a tear to my eye.

And so a new month begins. Mom went out this morning to begin shopping for her new fairy garden project. Bless her little heart, she does NOT have a green thumb. We're not sure what that is, really, but it's supposed to be good when growing stuff, so we think this all may be in trouble before it starts but... 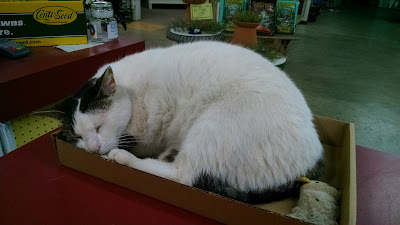 She met this handsome, rugged mancat at the garden center. His name is Buck, but he was hungover from last night's activities and unwilling to meet & greet his customers. We understand. And we're quite tolerant of this because Mom swears she didn't touch him at all, but she did say hello.

However, we do enjoy hearing about working cats! There sure are more of them than hoomins think. We play a vital role all over the world.

Have a great weekend, furriends.