Mom, I know you're busy with your "lessons". And yes, I know that it's for our future. 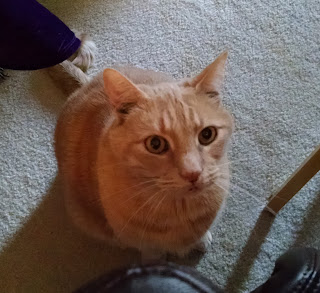 But... how can you resist this handsome, eager face?? 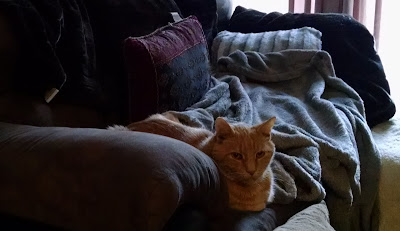 I refuse to lay on the temptingly arranged blankie in protest.

A mancat has to put his paw down sometimes. 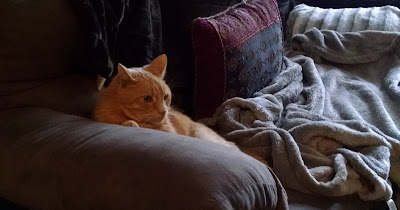 So I will squnch myself into this corner and sulk meditate.

Mom's note:
Toby really isn't happy about the time I spend on my online classes.
He might be.. a trifle... spoiled.

PS: I forgot to mention in my last post that Frodac the Boxer wasn't even MY dog.
He belonged to the neighbors, which makes his forbearance even more remarkable.

Also, his name came from "frozen daiquiris", which the neighbors were very fond of.

Our furrriends, Gorogoro & Nikiniko, lost their recently adopted tot, Kit. Please go by and visit their family. He wasn't with them long, but he was loved.
Posted by The Whiskeratti at 6:10 PM 9 comments:

Today we are remembering Those Who Came Before. Like most of us, I have memories of quite a few furry friends, some dogs, mostly cats.

Frodac - big Boxer male. I knew him as a child. He bit me one day, because I was in his face annoying him and he treated me as a puppy got treated. The barest scraping of skin right where my nose meets my forehead, I have a tiny, tiny scar. I have always been in awe of how this dog restrained his biting power to teach me to respect canines. Trust me, it worked! I never feared him even after that, but I did learn to be less annoying.

Skippy - sweetest dauschand ever. Beautiful girl, amazing personality, never met a stranger. HATED thunder though, really upset  her. I loved that dog, more than any other dog I've known.

Tiger - a tabby feline girl, looked much like Leia, raised Skippy as her own. The play fights they would have! Running back and forth through the house, never really mattered who was chasing who. They were certainly a bonded pair.

Casey - the only dog I've ever known that I hated, and believe me the feeling was mutual! Met him working at a vet. He was a terrier mix. When his owner came in the room he turned around and bit me on the lip.  I barely avoided stitches that day. Unlike my dear friend Frodac, there was no gentleness in his bite. He was a constant visitor to the clinic, and the animosity of that first meeting quickly turned to loathing. **** however he provoked me, and I assure you he did, I never treated him less than gently.

Mina was given to me as a 6 week old, but even then she had a tremendous sense of how regal she was. More of an Empress of cats. She had an old soul even as a tot, that one. Gray with some white, the softest fur ever. We were together for 15 years.

I miss her still.

We're really thankful that instead of having to go to work.. or fend for ourselves outside... we get to do this: 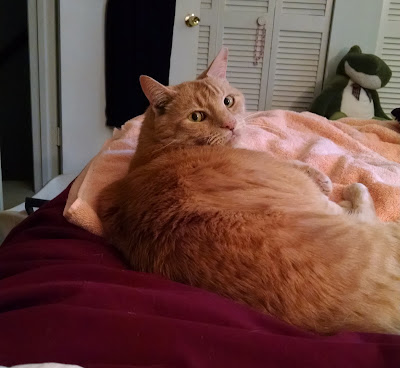 Posted by The Whiskeratti at 8:26 AM 5 comments:

Furriends, we feel faint. Mom saw THIS horror being created at Michael's this weekend: 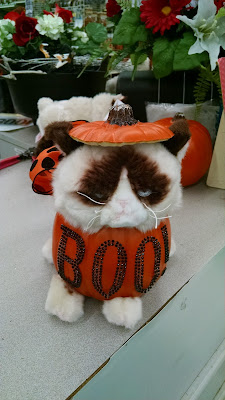 and yes, that IS a bow in back. Grumpy Cat, our  hero, wearing a cutesy bow.
With a pumpkin top for a hat.
So, of course, Mom felt inspired to dress up our own GC for Halloween: 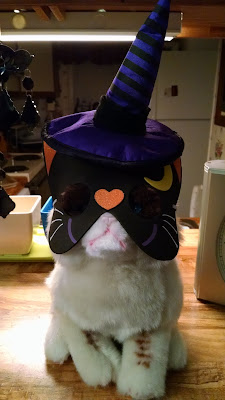 How could she! We have to organize a protest - what was that, Mom?
Dressing up GC keeps you from dressing US up? Ohhhh....huh...hmmmm....
:thoughtful pawse::
Well, do carry on then.
Grumpy Cat issued this statement today:
I'm a cat. Dressed up as a cat. Ha ha meow. Hilarious.
Someone get me OUT OF HERE!!
Posted by The Whiskeratti at 8:54 PM 11 comments: 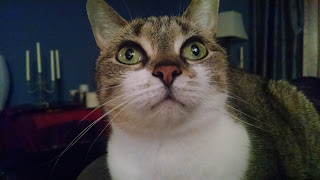 So yesterday, Mom came home and laid out our lunch buffet, like normal.
But you-know-who didn't come downstairs, so she went looking for him. 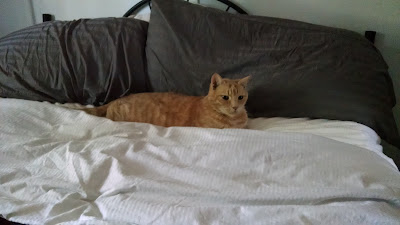 She found him here.
Since he usually pops up when he hears the meal service being prepped,
Mom decided he must be feeling a bit creaky so she.... 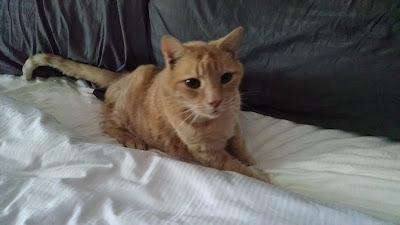 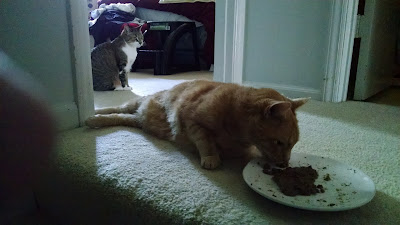 Provided concierge service!! Meh.
Milk it, orange boy, milk it.
Posted by The Whiskeratti at 9:04 AM 9 comments: 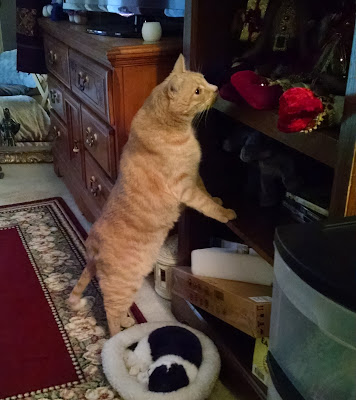 The Word about Billy Sweetfeets

One of our own needs help: Billy Sweetfeets from the Meezers.

He's having all kinds of problems - we hear it was a rough weekend - and that means lots of Stabby Place bills. Please help if you can.
Posted by The Whiskeratti at 8:03 AM 9 comments: 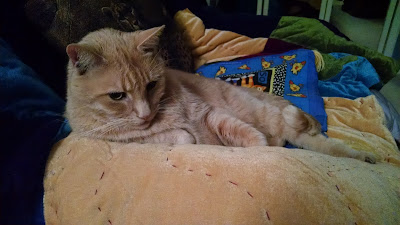 Hey y'all. I'm kicked back in my throne chair, just relaxing. The weekends are so exhausting - constantly keeping watch on Mom's activities, sleeping, more sleeping, stepping on Leia... The usual.

Have a good week, kittens.
Posted by The Whiskeratti at 9:30 AM 12 comments: 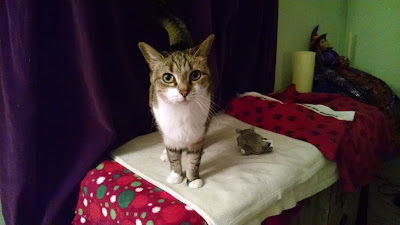 Mom says I'm turning into quite the little beastie when it comes to fried chick-hen. I'm even darting in to take it from the Orange Behemoth. He hasn't quite figured out how to handle that yet. And I am way faster than he is.

Hey, I just know what I like and I am NOT a-skeered to take it. It's all part of my plot to Take Over, ya'll.

PS: Mom, calling me a beastie is just a little bit rude!
Posted by The Whiskeratti at 6:07 PM 10 comments: 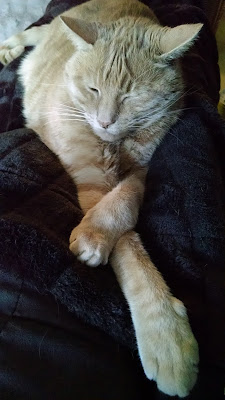 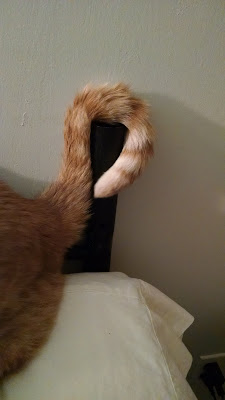 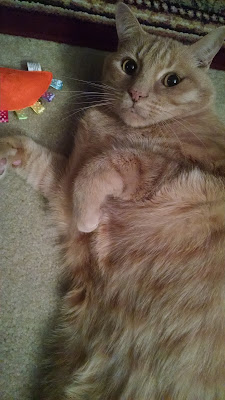 Yesterday I was QUITE busy supervising Mom's cleaning efforts: 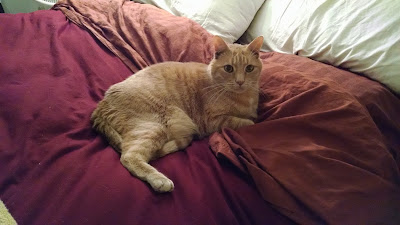 And now I am VERY tired, so it's off for my Easy Sunday rest: 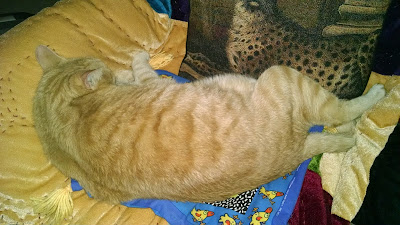 I really hope she doesn't do anything today that I have keep watch on! Maybe I will send Leia instead...

PS: Mom has started keeping an eye on the new Halloween stuff in the stores. It's her favorite time to shop. She found this at Michaels: 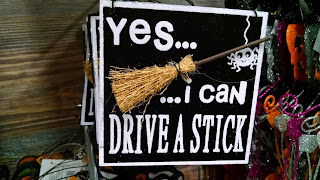 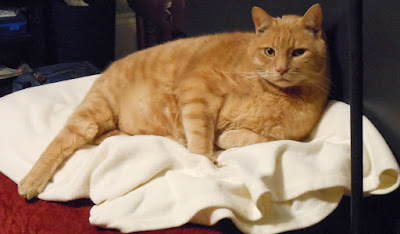 Every kitteh knows this; and most woofies too. Mom has never been a fan of them. She thinks they are cute and certainly doesn't want to see one meet a bad end, but she also never wanted to adopt any.

Today... Furriends, did we ever hear an earful about them today! She had to take her car to its Stabby Place unexpectedly because the alarm (that she doesn't actually have, she says) was going off and wouldn't stop. The problem was that some bits of the system had been installed at the factory, she told us, but not the bits that make it work, like the control module and the key chip (umm... WE haz no idea what that means but we're assured our furriends' 'rents will know).

Just enough was there to be a problem; the fix it guy thinks there was a short that caused it to go off - because the d#$*%)#### ebil critters had been chomping at things they had no business chomping at.

Oh, and for more evidence - they found quite a bit of acorns tucked into odd places. Around the battery, too.

Because the place we live now has lots of concrete, and our prior home was very woody, big trees and certainly lots of the aforementioned residents, we're pretty sure the culprits were thugs from that place.

Be ware, people, be very very WARE! They are OUT THERE!!! And they want to EAT YOUR CAR!***

Mom is always telling me what a beautiful girl I am... 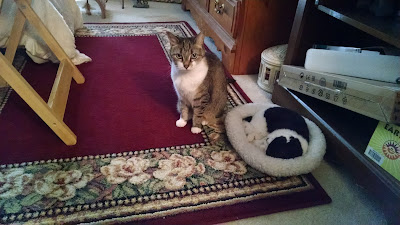 With my big green eyes and amazing tummy furs shading.... 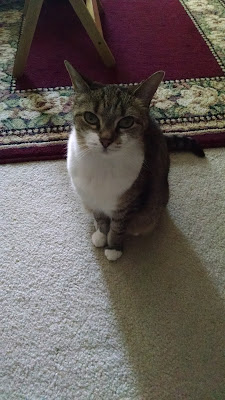 And how lucky Toby is to have me.

Really, you know, I think I must agree with her. 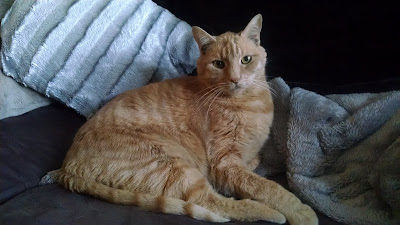