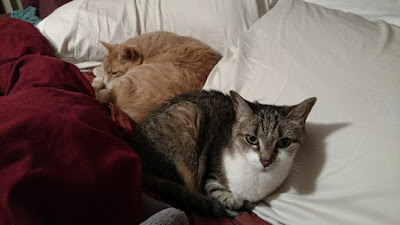 As January closes out, I am reminded that I should do some kind of memorial.
The truth is, I don't want to. I don't want to remember that they are gone forever.

Their passings took big chunks out of me, that I will never get back.
We grew older, together, over the years; I'm not the same person that I was then.
They were my family. Our daily lives were so interwined. In many ways they were my North Star.

I live with their absence every day. The emptiness is almost worse than the active pain was. 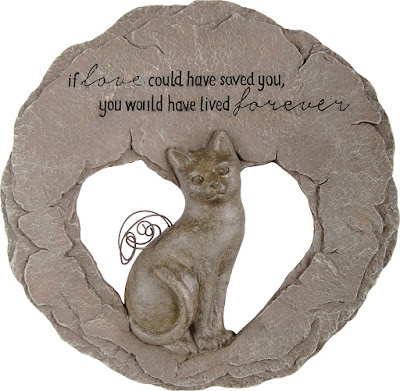 I loved you both. I love you still. Now and forever and always. 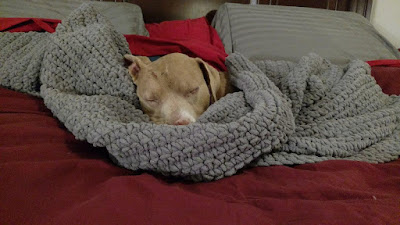 Brekke had a good vet visit; she's fine. They gave her painkillers and antibiotics.

She has a great passion for sleeping, as you can see here.
She loves my bed, with my electric blanket, and will stay here for an entire night.

I took today off, to rest and put my room in order. Sylvina helped me with that.
As we all know, cats are most excellent helpers.
Posted by The Whiskeratti at 7:35 PM 17 comments: 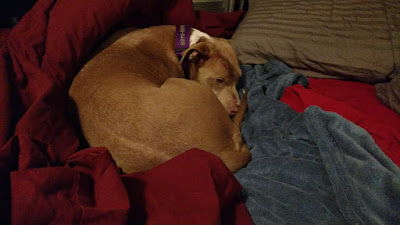 This is Brekke, about 60 lbs, 8 years old. She's a rescue from terrible circumstances.

She is pleased to meet everyone but will have you know she is NOT a dog, she is a people.
And deserving of people's rights and privileges. Brekke is also an escape artist. Yesterday she made a hole in the fence and went exploring solo.... until a car hit her.

Blessedly the driver stopped and did what she could until help arrived. That purple collar has her name and human's phone number so she was returned quickly. Injuries seem minor, mostly on her head. Cut skin, brusing and some swelling. She's going to the vet this morning.

I have explained to her that this is not people behavior but she remains unimpressed, though will admit to a headache. 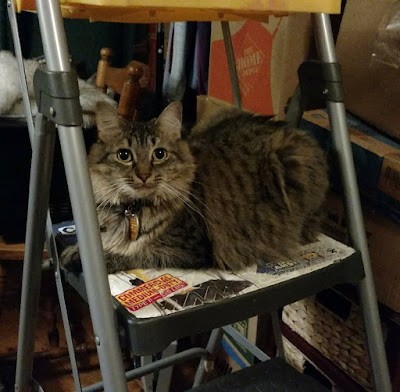 Syl has discovered my stepladder, which she is passionate about. 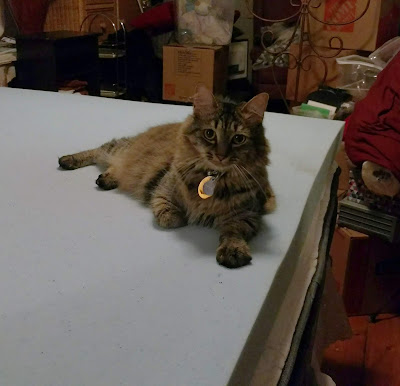 May I present one of my new roommates, the lovely Sylvina. She was gracious enough to offer expert bed making advice.

She's extremely friendly. And sheds a lot while she's being enthusiastic. I don't mind though. Right now she's next to me purring loudly.

My apt is a disaster zone and everything aches. I've been on Tylenol all week. Almost everything is moved over and tonight is my first in the new place.

I think I'll like it here. I have my own entrance, and the location is much more central. Still, it's a big change and I have a cat's view of change. 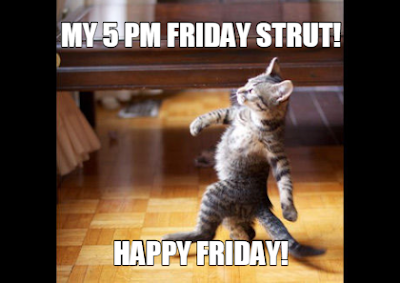 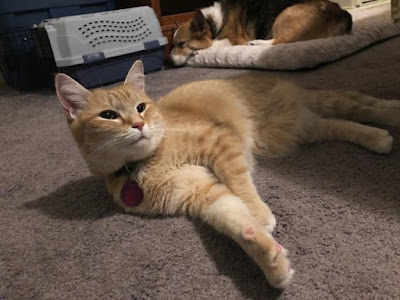 The herd made it safely to WI. Raji didn't eat for the two day trip - during her mystery illness I'm told she didn't eat for eight days! - and all are doing well.

And now, since I have no more cat or dog stories, I'm going to talk about M & H. 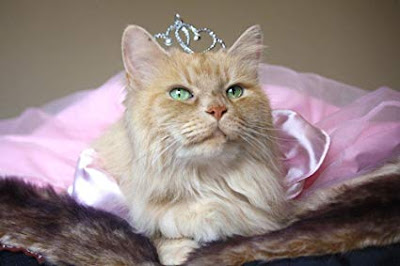 I was an admirer of Princess Diana, so I've followed her sons when they appeared in the news.

I like Duchess Kate; she's doing all she can to become a proper Queen (whatever her title ends up being). She wasn't born to the nobility but understood that her life would change dramatically. I respect William for doing all he could to prepare her for the realities of royalty.

1. Massive, massive disrespect to the Queen. If anyone understands what it costs to be a proper royal and adhere to duty, this woman does. She deserved better than what her grandson did.

2. It boggles my mind how little time M has actually spent doing royal things. If you deduct the honeymoon, her maternity leave and holidays, it's maybe been.... a year? I think when she wasn't able to instantly reinvent the royal family to her liking, she began planning.

3. I was on the fence until now about her. But I've read too many stories accusing her of being a social climber, and ditching friends who couldn't help her climb, to be able to ignore them at this point.

4. They want to have fame and fortune on their terms, when and as they want it. Sorry, kids, fame - and life - does not work that way. Whatever you choose, there is a price.

5. Family - on the small scale, not THE Family. I hate to say M has encouraged and possibly created this wedge between H and his family but.... if the tiara fits. And I think fairly soon, once the novelty wears off, he's going to regret this big time - and resent her. I also read today that though Harry is staying in London to work out details with The Family, she's gone back to Canada. Nice partnership.

People should be able to have the life they want, if they can; I don't begrudge them that. But this could have been done in a much more respectful and private manner. Seriously, she's 93, did they really have to be this way about it all?

However, I don't think it will end well.
Far too many complex issues, citizenship and taxes, family and security realities,
marital and children problems.

It all takes its toll. I think at heart, Harry has been mad at the world since his mother died - I can't blame him - and M showed him what he thought was a way out. For her there is no downside.
For him, I think the cost will be far higher than he realizes.

(I'm not even touching the "work towards financial independence"
for people who have a combined estimate personal worth of $36 million).

All of my roommates left for Wisconsin this week. The house is completely empty except for my room. I will also leave for my new place next weekend. Coming home to a place devoid of furry people, once again, was really hard. Here a few pics and some stories to wrap up my time with them. 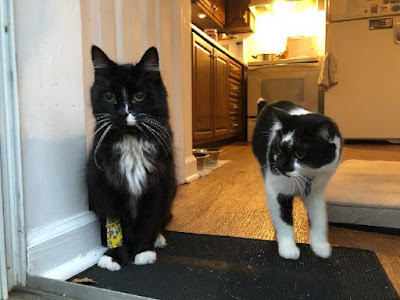 I really love this pic. Mattise had just come home from his dental and
wasn't really sure what planet he was on.

Sarah, my girl!, had her tail stepped on by Tombo the night before they left.
He didn't mean to, he just wanted to join the group chat in my room, and misstepped.
Sadly she took a hard swipe and caught him right across the eyeball. He seems to be ok though. 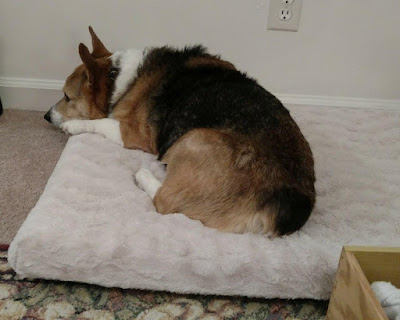 I sent him off with this bed that I got him. He needs all the plush he can get for those old bones.
To the very end, he spent most of his time in my room. 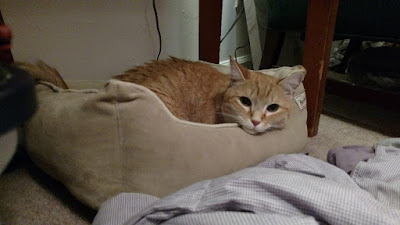 Princess Raji. I miss them all, but I worry about her the most. She's the most fragile.
Since Oliver has been gone, her purrsonality has been emerging, but this sudden change,
and that 16 hour drive, could cause health problems to crop up.
She's already endured one long mystery illness.

I did get to see her rolling around on the kitchen floor this week - wow, she has a big tummy!

Raji Has A Message 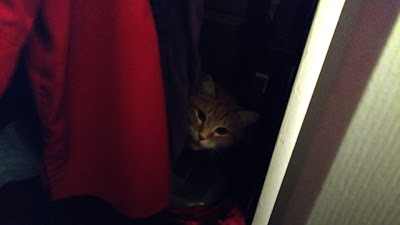 She wants everyone to know that the world has gone wonky, and hiding in my closet is the only sane response.

Mattise had a successful surgery and is recovering. Two teeth were extracted. He would like everyone to know that pain meds are niiiiiccce. 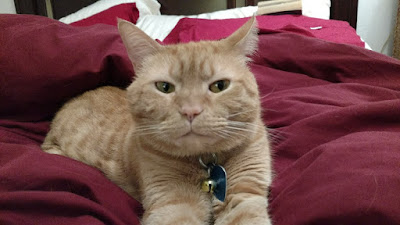 Last night Oliver went to a home with two young people. They already had a 1 year old; they are hoping that Oliver will help teach him better catly ways, and be a companion. I admit I was *very* nervous about potential adopters but honestly I was quite impressed. And when it comes to cats and humans, especially young ones, I am NOT easily impressed. Paranoid would be more accurate. I think he will be pleased to be alpha cat in his new home. There were too many ahead of him here.

It was always intended that he be found a permanent home. It just got easy to keep putting that off, but with the out of state move looming, it became imperative. I considered seriously taking him myself, but I just don't have the financial resources right now. And although I liked him, we just never quite connected, not like I did with Sarah and Raji, and Tombo. Had one of them been available, no one else on earth would have gotten them. I feel kind of guilty about that.

Now, poor Tombo LOVES his cats. So he was not happy to lose one of them. He's already having a rough time with some health issues, including a paw sprain that happened yesterday. Being old is just not easy.

Tomorrow morning Mattise goes under for his dental and extractions.
Please keep him in your prayers.
Posted by The Whiskeratti at 8:52 PM 11 comments: 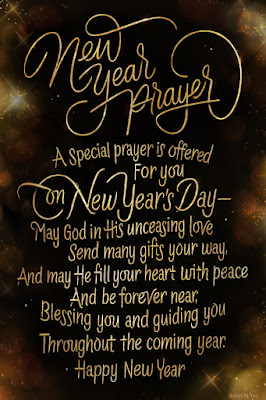 I pray and hope for all of us that 2020 will be a wonderful and blessed year,
bringing peace, happiness and plenty, better health and love. 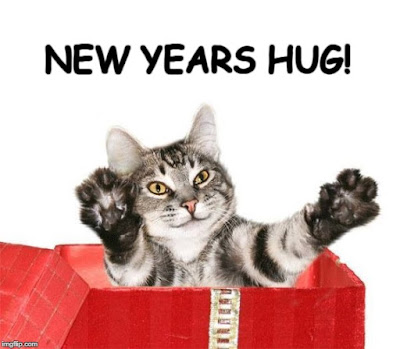