Happy Friday, folks! And now we are returning to MY regularly scheduled day. 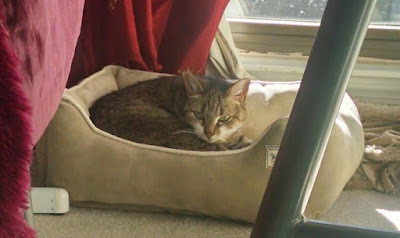 I'm settling in very nicely. And by the way, I wanted to clear up something about The Move Day -
I was not trying to escape, I was only testing security. Really, I was doing everyone a service. 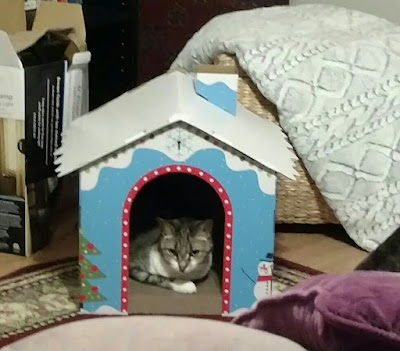 Both Toby and I want to thank the kittehs from 15 and Meowing for this PAWSOME gingerbread house. Isn't it amazing? I've pretty much moved in, as you can see. It's an amazingly purrfect fit for me. Mom often comes into the living room to see me lounging right here. Thanks guys!

PS: do you think...maybe... Brody helped his mom pick this out? For me?

Graphic story ahead, kids, if you have a delicate tummy. 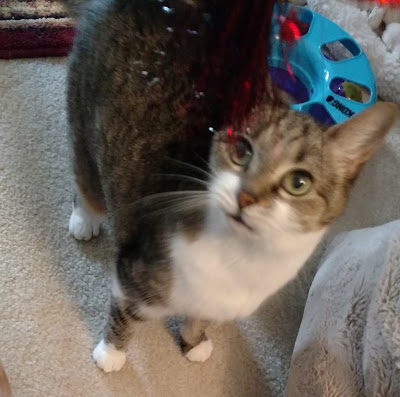 So, today's post was going to be all about me. But something happened
that I just gotta tattle on Mom about share with our furriends.

And THAT is when the Great Toby Tummy Explosion of '16 went down.

It was glorious! Wet food everywhere... the comforter, the duvet, the Dream Lite, the step stool that helps him get up on the bed. The floor, AFTER that mean wench pushed Toby to the floor, but by then it was too late. And it got on Mom too.

Then came the words. Oh, the words! We've never heard her say things like that, furriends. Forget HBO words, this was... was... something way past HBO words. We didn't even know those kinds of words existed. At least not in those combinations.

Toby disappeared for awhile. Mom has been apologizing profusely to us both..... well, after the extensive clean up anyway. We will confer tomorrow about possible forgiveness.

I mean, our ears are still singed, y'know.
Posted by The Whiskeratti at 3:03 AM 14 comments: 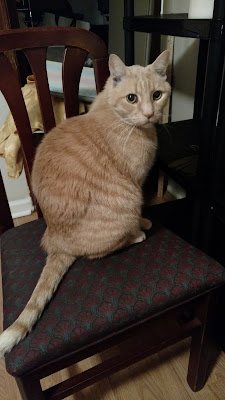 All right, it's time for me to put my paw down.
No more shenanigans! Holiday is O V E R! 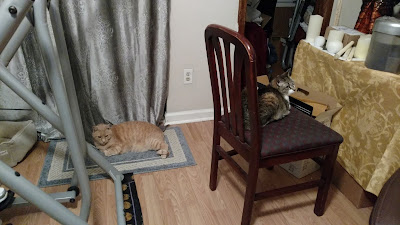 We need to get this place cleaned up, back to normal
(that's you, Mom).

Leia, you... you... you just need to stop being so petitely cute!

Hop to it, folks.

It's here! We luff Fridays. Although right now, Mom is home most of the time so it doesn't matter much. She says she's going back to work next month so we will be on our own more. 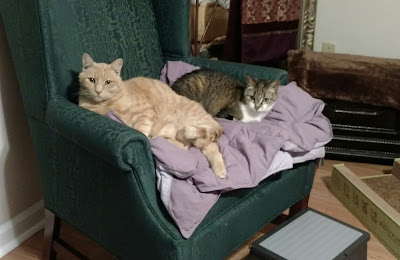 She thinks this is the cutest thing ever, but really, we are just taking
a break from a very intense struggle of King (or Queen!) of the Chair.

Today she bought herself a present. I mean, why?? 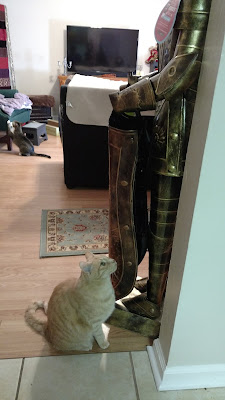 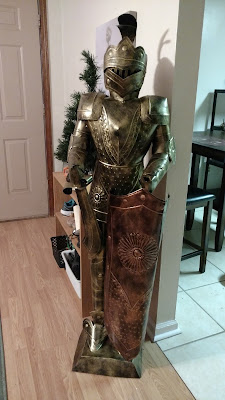 We wish everyone a wonderful, and happy, Chrissymouse Eve and Chrissymouse Day.
May peace reign.
Posted by The Whiskeratti at 10:23 PM 21 comments: 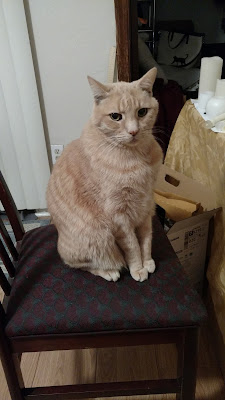 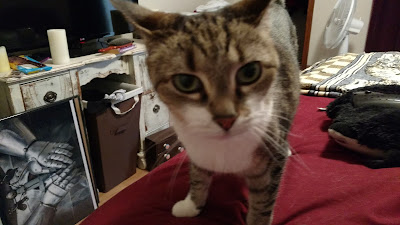 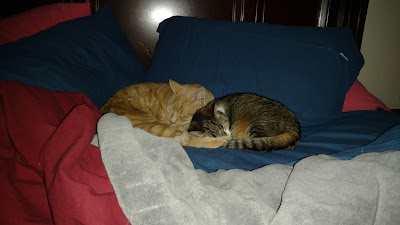 What happens when you mix one tiny girl with
four unproductive hops into the facilities in the space of 3 minutes? 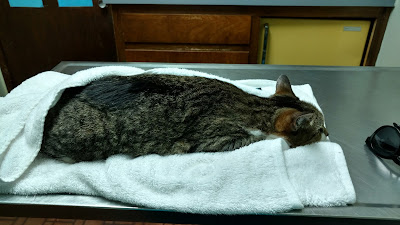 Yeah, you guessed it. Incidentally, this was my pose the entire nine hour trip.
Hey, it worked then, why not at the Stabby Place?

The guy there thinks the move stress was trying to trigger a UTI.
There was some talk about some medication but .... ****

Oh, and we are dealing with my little ear infection too.
That was fun. 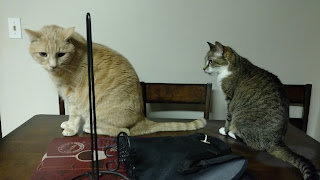 On the plus side, I'm now a regular attendee at the dining table.
Toby LOVES my visits too. He said so!

**** Mom:
She's 6 pounds now, too small for a pill, so I'm putting liquid antibiotics
into her Pill Pockets. She LOVES them. It takes two to get all the meds in her.
Posted by The Whiskeratti at 9:50 AM 16 comments: 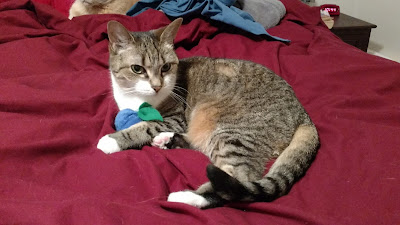 Here I am, with my favorite blue nip toy. This was the one that Mom couldn't find the very first night we got it. I played with it like crazy, then .... well, *I* always knew where it was, but she didn't. Anyway, it turned up after we moved! Yeaaa!!
After I got it back, I slept with it tucked under my chin.

A girl has to keep careful watch over her things, don't you know. 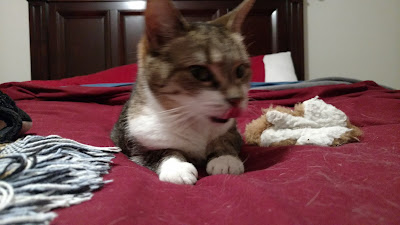 Plus, it tastes really good. 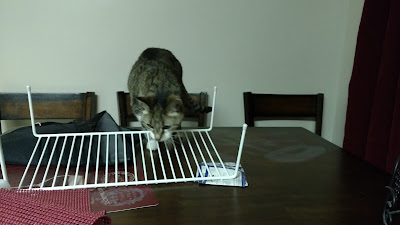 But someone else ISN'T! 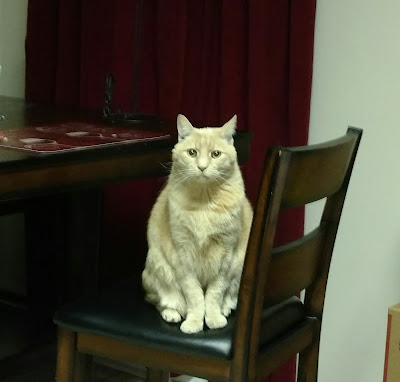 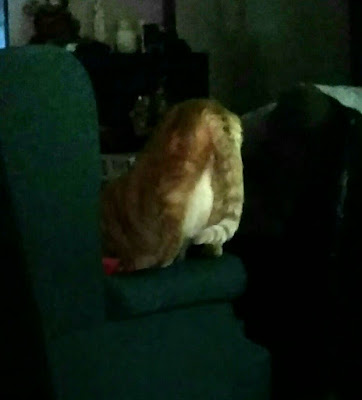 So, things are good here. It's really nice to be able to keep an eye, and sometimes a paw,
on Mom without having to go up those darn stairs. That's a bonus. 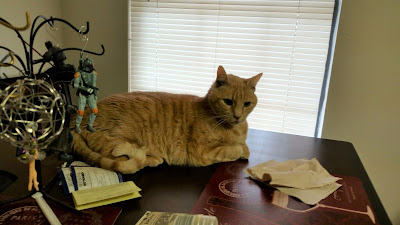 Remember that silly rumor about us not being on the dining table?
Ha. You see before you, I *am* on the table. I found a way up all by myself -
I am quite clever - so now I can carefully, carefully, supervise the meals.

Even better, Leia hasn't figured out the Way Up, so it's all mine! Until she does, anyway.

Unfortunately Mom is holding firm on the look, smell but NO PAWS on her food.
mouses. 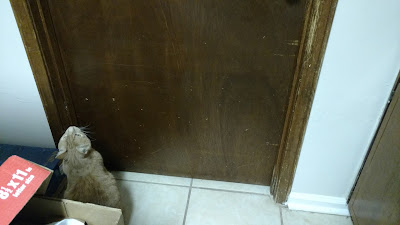 But THIS, THIS is the fly on my butt, people.
The Room of Mystery. Off limits to us felines, and Mom absolutely will not budge.

We all hate closed doors! 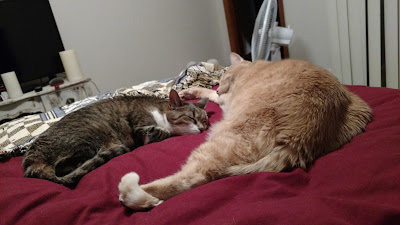 It's ok. I will put my brainpower to work on this knotty problem while I rest.

The room of mystery is the laundry room.
The table... he was so proud of himself for figuring out how to make a jungle gym and climb up,
I didn't have the heart to make him get down.
Posted by The Whiskeratti at 9:53 AM 16 comments:

As you can see, we're working hard on settling in, helping Mom unpack, and stuff like that. 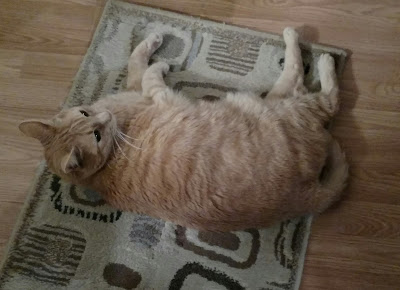 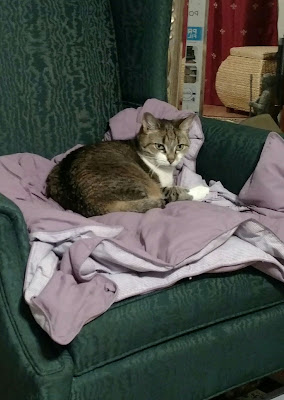 But, we are very tired now, and are taking a well deserved rest.
Mom has a few things she wants to share,
so we hope everyone has a wonderful Caturday.

I wanted to share what I could of our trip, in case someone else needs to make one.

Best advice? DON'T!! I'm pretty sure I lost a few years off the end of my life doing this.

In case you have to -

1. I bought a medium size dog crate, plenty of room for them and a small disposable litter box.

2. I sedated the cats, with a trial run the week before. Ace - something or other.
Had roughly the same effect that a Nyquil dose would have on us.
I am very glad I did this, for their comfort. I used a towel sprayed
with Feliway draped on their cage too. I was reluctant to use the medication but am very glad I did.

3. I insisted that the cats never be left alone in the vehicle.
I wanted eyes on them the whole time. When we all stopped for lunch,
I stayed in the car with the cats.

4. I had water in their crate, but they never used it. I tried to convince them, but they would have none of it. Toby used the box once, while the car was moving. Leia pretty much never moved from her spot from behind Toby, but eventually she too... well.... there was clean up involved later.

5. Maybe the most important aspect: Temperature monitoring.
I chose the time of the year for its mildness, and we were blessed with very overcast skies
until three hours to home. We hit Florida and the heat increased. I kept having to stop so I could readjust and keep the sunspots from hitting them, especially Toby. After our experience with heat stroke, I no longer trust either of them to move under such extreme emotional circumstances.

Towels and blankets were essential in keeping the sun from getting to them. We had plenty of AC and I kept sticking my hand in the cage to make sure the air wasn't too warm. If anything, I may have kept it a bit on the colder side. By the end, I could barely see the cats because of the coverings.

I also took a battery operated fan. I used it during our lunch stop. Just in case.

And that's the story of our Big Moving Adventure. We're settled in now,
I'm unpacking a LOT of boxes and every night they are a bit calmer.
Posted by The Whiskeratti at 8:23 PM 15 comments: 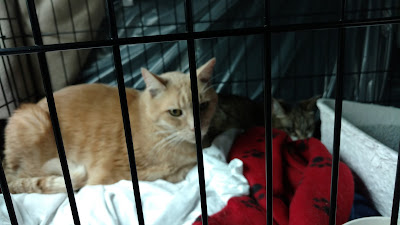 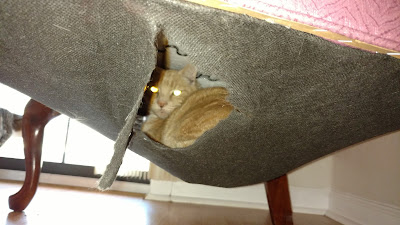 We just wanted to let all our furriends know that we made it safely to Florida.
We are all VERY tired. And... we almost lost Leia. She bolted during the loading process
but didn't quite make it out the front door. 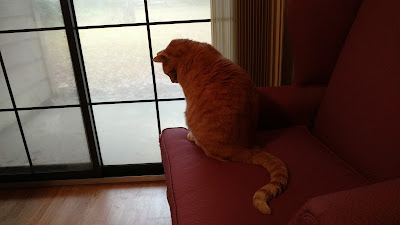 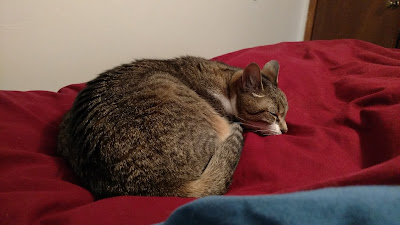 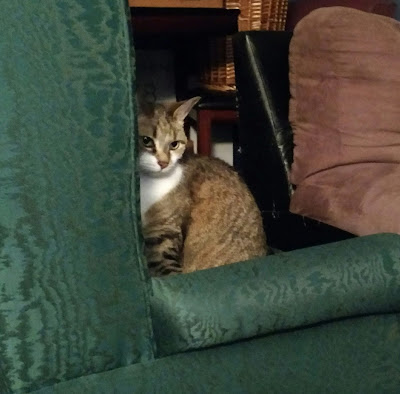 Mom brought home a second chair just like the first, so
now we each have our very own chair. Like thrones!

She and I had a long, serious talk about our move. She's
depending on me to keep Toby calm and quiet throughout the car ride.
I promised her that I would definitely look after the big orange guy.

I mean, I'm a bit nervous too, but I'm much better at handling things than he is.
And Mom will also be right there with us, so it's all good. 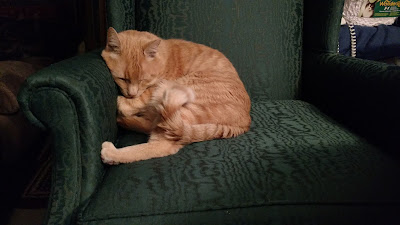 Thus ends the very last posting we will ever send from North Carolina!

PS: I don't care what anyone says, I did NOT poke him one in the eye the other night.
I'm sorry he had to go to the Stabby Place to have it looked at, but it wasn't me.
And anyways the lady there said he's ok, just a bit irritated.