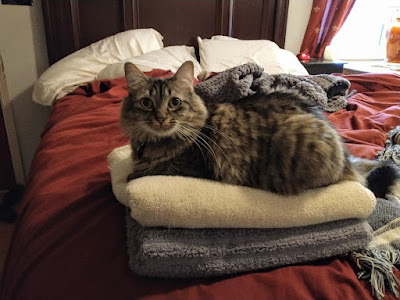 Dear friends, we had something truly awful happen last night. Vina was attacked in her own home, by a guest's male pit bull. She was closed up in the bedroom but this foul beast pushed open the door and tried to kill her.

It had to literally be pulled off of beautiful Vina. She lost some fur but otherwise seems to be physically unharmed. It was so close! A few more seconds and that would not have been true.

Emotionally she's suffered a great trauma. I got to see her late last night. Her eyes... she looked so shattered, distraught. So would anyone who had their sense of safety at home destroyed.

Even worse, Brekke was in that room too. It's unknown, but most likely pack instinct would have kicked in. They have always been on good terms, and it's heartbreaking to think Brekke could have been part of something so terrible.

Posted by The Whiskeratti at 6:45 AM