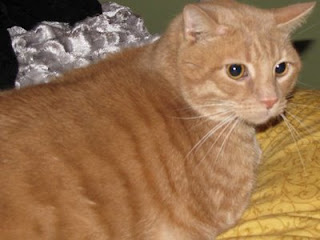 WELL!! The NERVE of some hoomins. Now, I do luff my Mom Bean. But last night...ooooohh last night, I had to give her a stern bunny kick!
I was on the porch after dark, just relaxin', looking around at all the stuff going on out there, minding my very own business when the Mom Bean decides it's time for me to come in. Hmpf! She tried to pick me up but I gave her that bunny kick and ended that notion right there! I was just NOT READY to come in. Plus I gave her my very best outraged stare, too.
** I did make up for it later. I sauntered in when *I* was ready, and then went to sleep with her so she wouldn't feel too bad. But you know, a kitteh has got to assert his independence every so often.
Posted by The Whiskeratti at 8:37 AM