The Kitteh Who Came Before 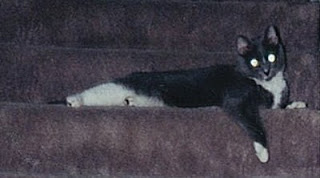 Today we're going to remember the Cat Who Came Before, Yasmina. She came into the Mom's life at the vet clinic where she worked. Mina was an eight week old tot who was abandoned by her former hoomins there. She went in for the first set of shots and just never got picked up again.
Even as a kitten, Mina was intensely regal. She didn't play... didn't chase jingly balls... ignored the danglies with supreme disdain. She did develop an interest in hanging out with the Mom's baby niece in the baby crib - or maybe it was the baby bottle that attracted her. (No, this was not encouraged and eventually Mina stopped). And she always had the softest fur imaginable. Mom swears she's never felt anything else like it.
Sadly, she developed this thing called "cystitis" at an early age and had to always be on the special foods. And there was a lifelong tendency to pee in the wrong places, but Mom says she just accepted it as part of the Mina package since nothing she tried fixed that (and is extremely grateful that neither Leia or I have this habit).
Mom tells us stories about her sometimes. Mina was an amazing cat, beautiful, soft and intelligent, but she didn't play well with others. When she was fifteen years old, she had to be helped to the Bridge.
And that is the story of the Kitteh Who Came Before.
- Toby
Posted by The Whiskeratti at 12:14 PM