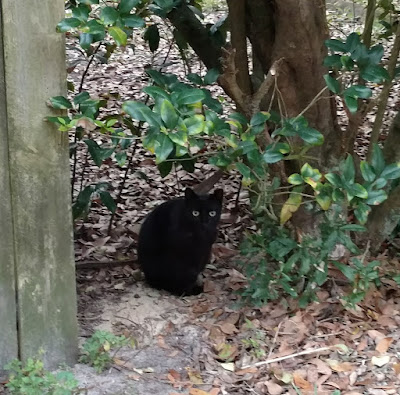 This is one of two cats I feed. I don't know how often the other cat comes around, but this one I see a lot. I get a girl kitteh vibe so I named her Shae. I figured that's good for male too, though it leans female. I read years back that cats respond to the sh sound so that led me to this choice.

Shae will meow at me, and often will be waiting on the front patio for breakfast, which is served on the back patio.  She won't come near me but the fact that she tries to communicate with me makes me wonder if she wants to be friends. Or if she's saying hurry up! I've started talking to her but I don't try to touch her.

In other news... I'm already prepping for hurricane season. I was horribly unprepared for that five day outage. Collecting is also expensive so I'm doing this in stages. I have added several good LED lanterns, and Monday a very impawtant accessory arrived: my cell phone power bank. It gives 8 charges, according to the specs. I spent a lot of time last fall trying to keep charged.

Of course, THE accessory to have is a generator but darn, those are expensive. It won't be this year. Perhaps 2020.
Posted by The Whiskeratti at 8:27 AM