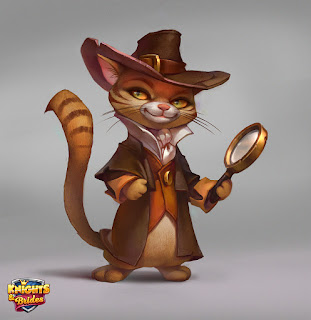 I should have explained why I knew it was Ollie that attacked the innocent Christmas cookies.

He was born feral, and lived outside for the first 3-4 months of his life. My roommate was determined to get him inside for a safe life, and he accomplished that by luring him in with food.
He placed the meals further away from the back door each time, eventually getting the door shut before the orange boy could make it back out again, at last.

I'm told the aftermath wasn't pretty. He ran straight into the glass door at full speed;
then hid for days inside. Adjustment was difficult. He was absolutely terrified,
but it was the beginning of a life of safety and plenty.

However, Oliver didn't quite get that memo, and ever since (maybe three years now) has been highly food insecure. He has to be fed in a crate so everyone else can eat, or he will get their food too.
He's right there for every meal eaten by humans. Food left out will get assaulted, as you've seen.
He will lick pans and cups and cutlery. In fact, forks and spoons left in the
sink will get dragged out onto the floor for intense cleaning.

I've stepped on quite a few forks in the mornings!

So yeah, it was totally him.

PS: though no one suffered any kind of chocolate poisoning, I was told that there were aftereffects. Let's just say that 1. the litterbox situation was NOT pleasant, and
2. I'm very glad I wasn't the one to clean up after that.
Posted by The Whiskeratti at 8:18 PM